Hive is conceived and designed as an intelligent, adaptable and sustainable family home at Surat, Gujarat. The form of the house is seeded in the profession of the client Kamalbhai Mistry — who is part of an extremely successful company engaged in making machines for the diamond industry.

The site is located in Vesu, an upcoming part of Surat. The plotted development has apartment complexes on the east and west plots. This particular project was part of four plots taken for the extended Mistry family. Being well-informed about architecture and given his core competency in mechanical engineering, the client was very clear about what he wanted as a ‘home’ — a smart structure rendered in metal and a ‘mono-space’ living area. Along with those primary thoughts, the client communicated an almost 90-point brief with inputs connected to diverse points — from structure, landscape, planning, materials, sustainability, insulation, HVAC and plumbing, along with entire year’s sun path study.

With the dominant presence of metal, the concepts of long span, light weight, a complex form and fast construction came on board, with the form itself being moulded by an in-depth analysis of external temperature, humidity, solar radiation, cloud cover and wind pattern. The architecture is expressed as an angular V-shaped structure oriented towards the green pockets spread around the house. The entrance creates a bridge and valley experience, with a sunken court and stepped garden, a linear arrival corridor and the walkable green roof with varying slopes. This roof technically acts as a thermal insulation, lowering the overall temperature of the interiors, while functionally doubles up as a congregational area for social gatherings.

The architectural presence, undoubtedly, is established by the solar sensor-based facade, which lies at an exciting intersection of art and engineering. Its geometry is inspired by the hexagonal structural patterns found in nature such as those of honeycombs and carbon crystals — giving the project its name. Analyzed as per the structure, function and mechanism, its design is based on structural strength, transformability and bio mimicry. The unique opening mechanism of the facade positions are derivatives of quality of light exposure and thermal comfort levels inside the house. Experientially, the modules create striking sciagraphy by casting patterns that change with the diurnal rhythm of the sun.

The internal programme has been conceived as open and fluid, both in plan and volume. Devoid of dividing partition walls, the fluid spaces on the ground floor have a sensorial segregation of public, private and semi-private zones through modulations in the outer envelope along with a bespoke sculptural entrance vestibule. The upper level, accessed via a sculptural staircase, accommodated two bedrooms. The connection to greens remains steadfast owing to the presence of a small garden attached to each bedroom. Materiality includes metal with SS powder coating for the facade, and wood and stone in the interiors to bring in the warmth of a home.

The inspiration for the envelope and several other elements in the house, say the architects, were found small, everyday things. While the façade mechanism was inspired by doors of airport buses, the structure of the stair (which spans seven metres and has a thickness of 38 mm) was taken from the structural formation of hexagonal dia-grid popular seen in Ikea furniture pieces. Similarly, the movement of radio antennae inform the window opening mechanisms and the ‘kadki door’ of forts (a door within a door) was replicated in the entrance.

For the architects, the speciality of this project lay in a client who was open-minded and intrepid, ready to experiment with ideas that didn’t have many precedents. The client viewed this building like a product/machines he deals in, which is why the insistence on ‘manufacturing’ it flawlessly. He wanted something unique in every detail which put lot of pressure on the design team to deliver and not fail their expectations. Therefore, all the ideas that went into its making were backed with intensive research and and prototyping.

This project has given the architects the confidence to think differently, think big — as well as engage in extensive research and detailing to give form to the dreams harbored during the designing phase. 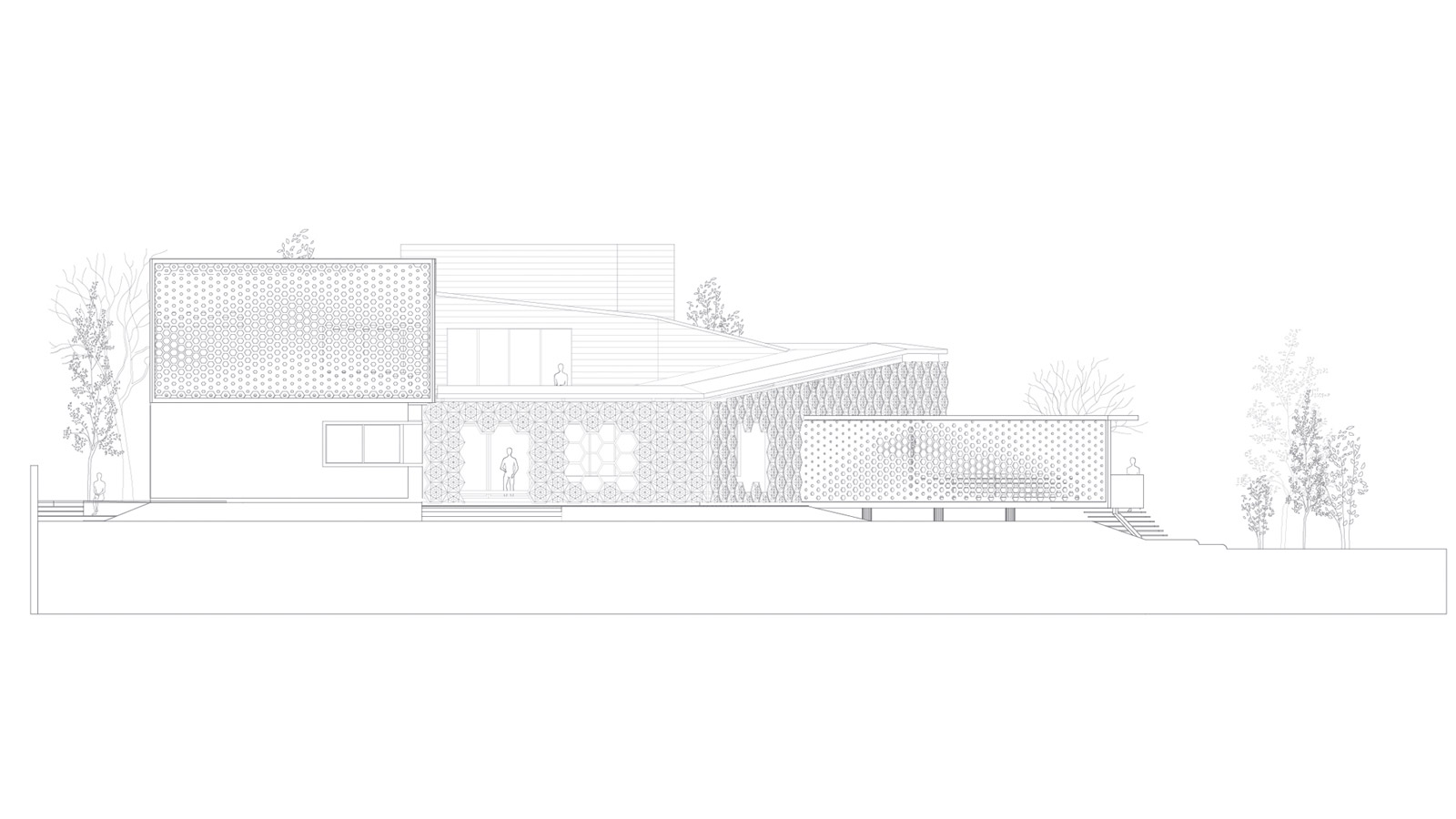 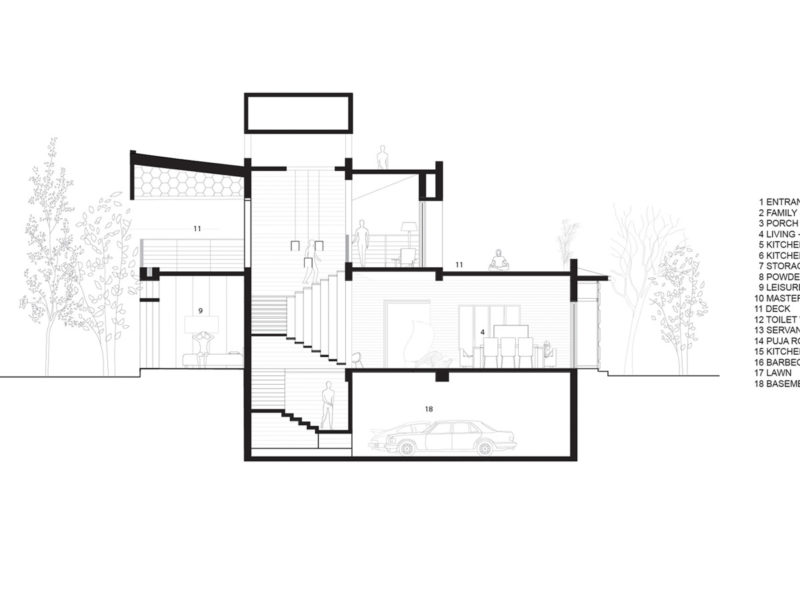 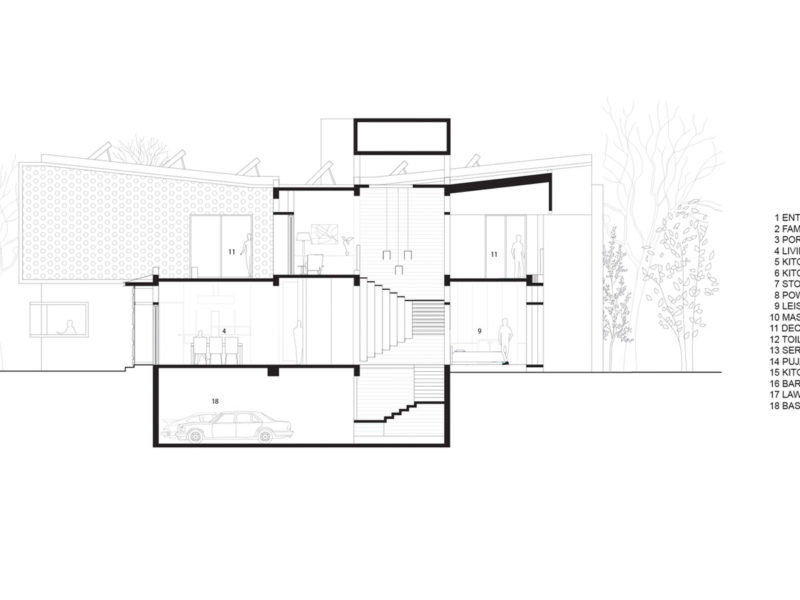 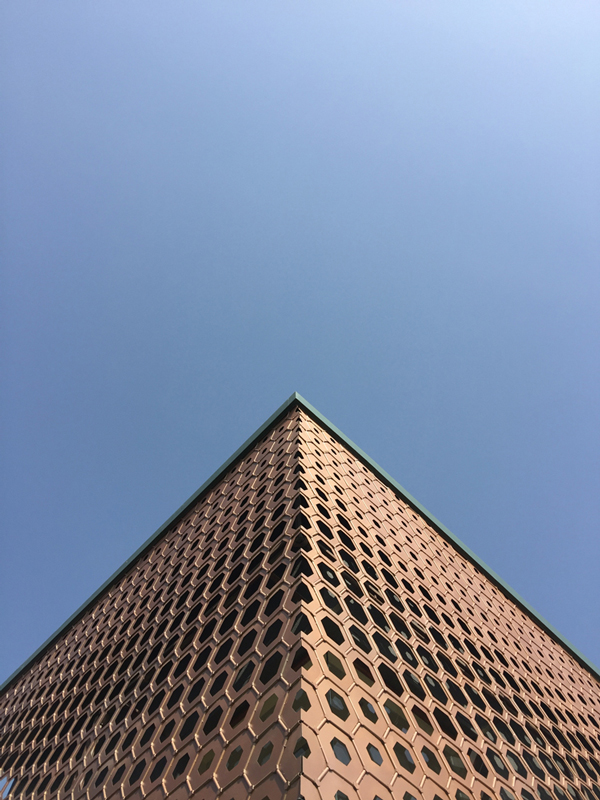 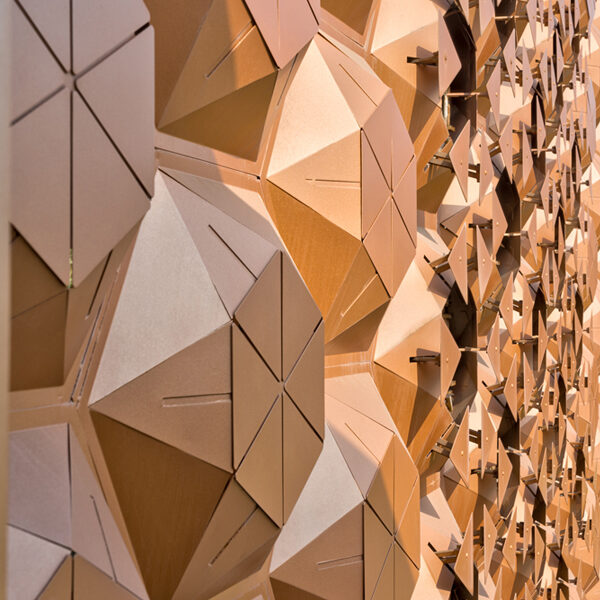 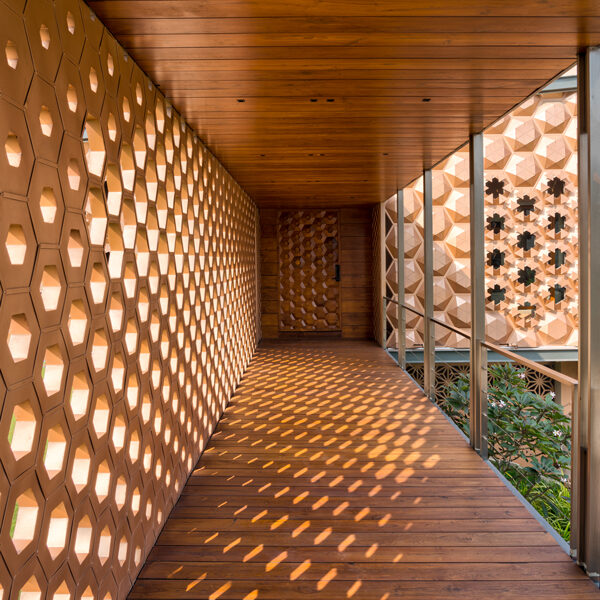 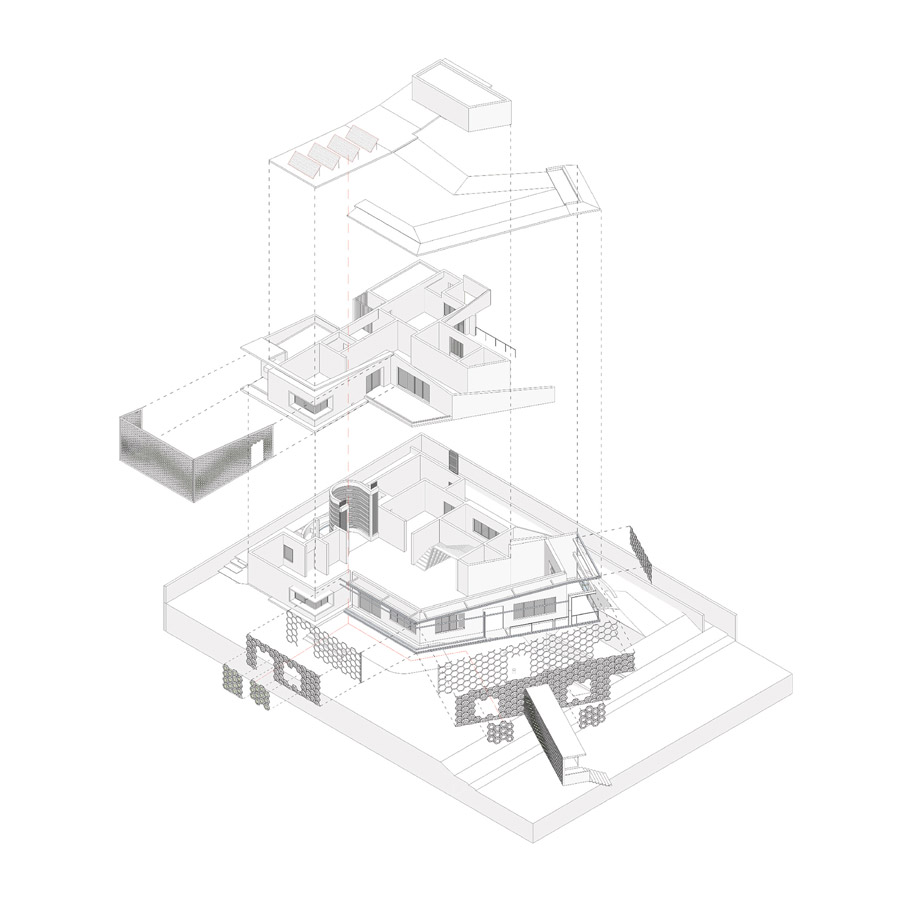 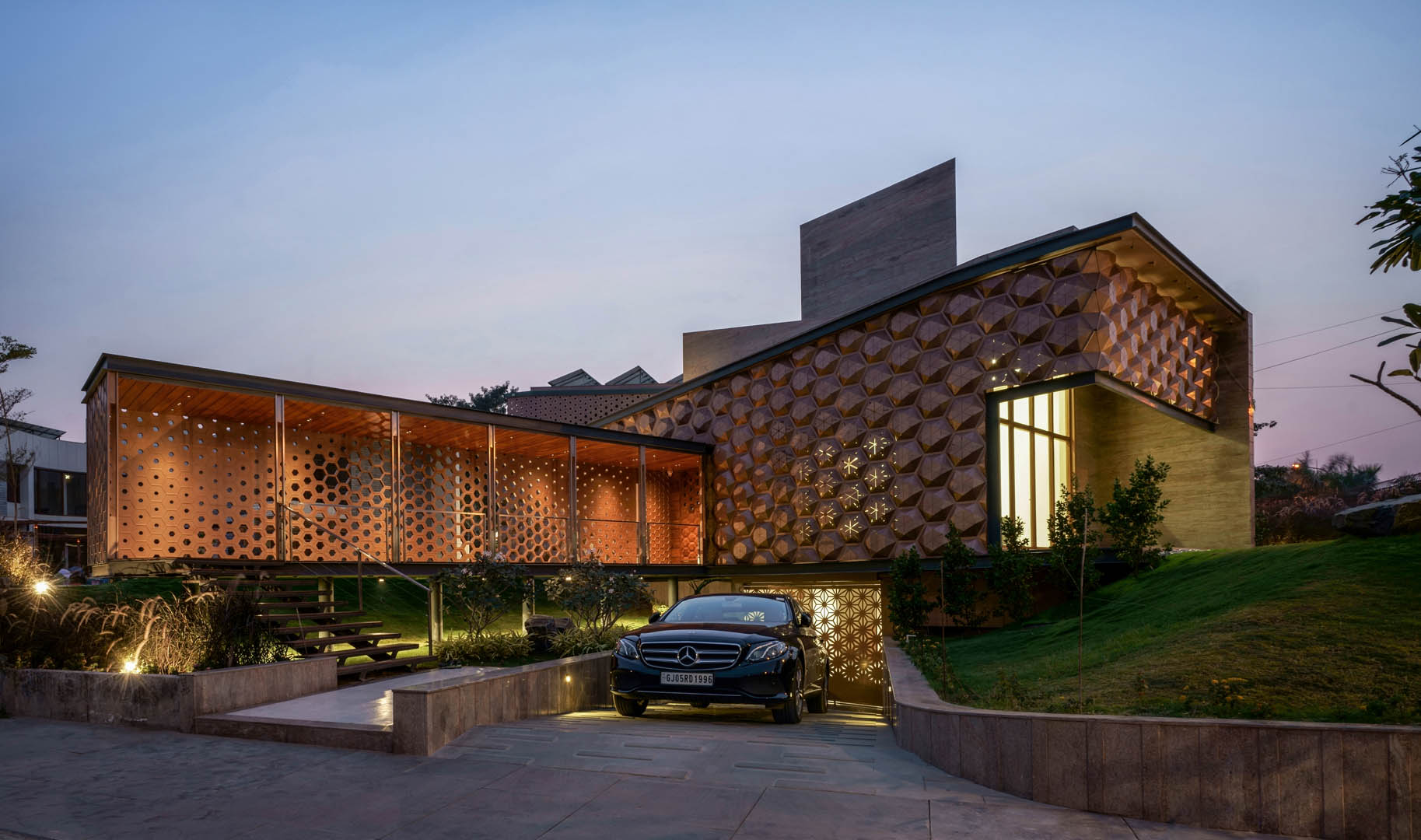