When the inspirational element is bound to nature itself, the designs becomes tough to be justified. The human eye is the most delicately designed feature of a human body. An eye is a bridge which connects the visionary senses to how we perceive space& form in real life environment. To capture the play of life, we need a camera to capture lights being fallen on the objects which results into a photograph that shows the depth due to play of light layered into multiple surfaces in real life. Light is a fuel that runs visionary senses. If a little amount of efforts can be put into designing architectural element which reacts the same way as human eye react to light, we can immensely increase the efficiency of built spaces and conserve more of our energy resources. But as we say always, mimicking nature has been always a topic of debate and endless arguments. We only can replicate mechanized sequences from the nature. To understand the senses of those mechanism we cannot   replicate a human mind behind its mechanized copy. But still, little efforts toward mimicking the nature can help a lot to resolve our design related problems. Human eyes are the cameras which allows a particular amount of light to be fallen on the light sensitive membrane called the retina and transmit the data to optic nerve which sends the layered data to the mind and mind decodes that data in layers of depth created by the differences of illumination. We humans need eyes to sense and feel the direct and indirect illumination around us, the eyelid and lateral rectus muscles helps the eye to control the amount of light to be fallen on a membrane like surface retina. As we all uses the camera these days, we all know the basics of camera are just replication of how human eyes react to the light. If we compare the diaphragm of camera to eyelid. The diaphragm acts on the principals of eyelid. The opening of eyelid controls the amount of light being bounced from the real life objects, the lesser the eyelid open the lesser the amount of light falls on the retina, same as we set the aperture value in our cameras , the more the aperture value is the lesser the light being sense by the sensors. Our visionary experience is also controlled by the eyelid that reacts to the nervous system which tells the eyelid to react according to the light intensity.

The facade system of “Eyecon” is an effort to mimic the functional parameters of human eye & the designed facade will react to the daylight mimicking the functions of how eyelid reacts to the ambient exposure. The psychology behind how we perceive depth between form & space is based on how our eye perceive the intensity of light and shade. The intensity of light & shade is not only controlled by the source of illumination but to maintain the consistency of illumination our eyelid expands & contract to counter the exposure of daylight so the neutral exposure can be maintained throughout the day & night. The same psychology is taken forward to functionalize the static form of facade into dynamically responsive facade system for the architectural purpose. The architectural concept is located& getting shape in the city of Ahmedabad, the geographical location of Ahmedabad is on tropic of cancer, this tropical zone allows maximum sunlight and clear sky throughout the year. For the particular tropical zone, the architectural concepts has to be designed in such way that it can counter the heat and radiation generated by the daylight. In the modern age architecture, the façade systems are developed in accordance to both aesthetics & functionality. But the adaptive nature architectural concepts in India somehow loose the grip on the functional aspects of the façade systems. We adopt the architectural inventions to improve both functional & aesthetic needs of a built space. The kinetic facade systems are being developed and innovated to resolve the issues which are concentrated to a particular space or zone in a state or a country.

Our effort behind developing the kinetic facade system for the “ Eyecon” is to make the optimum use of the daylight , reduce the amount of artificial illumination and controlling the amount of daylight to maintain bearable direct & indirect illumination from the sun source. The static form and aesthetics of the building facade is inspired by human eye. The static form of the building facade was developed to nurture aesthetically values of the built space, but zero function aesthetics is not a solution to problem being faced by the consumers who will be occupying the space. The facade system had to be dynamically modified in such way that it can cater with both functional and aesthetic aspects of the built space. The static design inspired by human eye had to be modified dynamically to mimic the nature of an eyelid of human. As mentioned above, the eyelid of a human eye contracts & expands to control the intensity of light being fallen on retina screen, getting inspired from the same behavioral pattern the facade was mechanized in such way that multiple layers of the form drops down layer by layer and makes opening and closing sequence that exactly mimic the contraction & expansion of eyelid. The expanding contracting surfaces of external facade allows the intensity of daylight to be controlled throughout the day , the dynamically mechanized motion mimicking the nature of eyelid also forms different formations between closed , opened and semi opened windows. The building facade forms the dynamic formation from the daylight responsive windows that also acts like a camera diaphragm which allows controlled flow of direct or indirect daylight to the interiors of the built space and also helps optimizing the switching between artificial lighting and natural luminescence. The kinetic responsive facade is a design initiative to make optimum use of available daylight and the responsive windows acts as a tunnel which eliminates the excess exposure generated by the daylight. 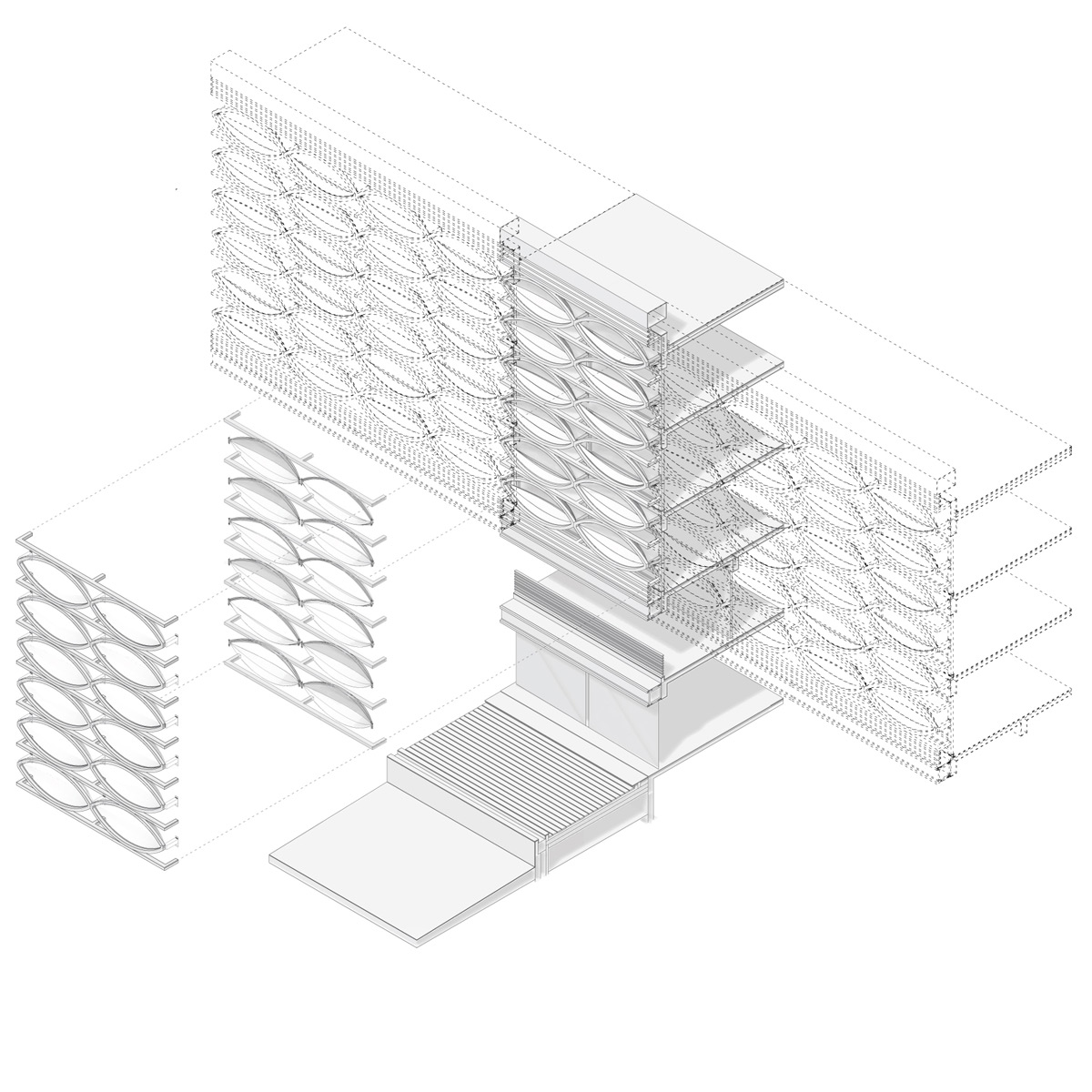